TELLING THE TRUTH ABOUT SURPLUS STEELHEAD 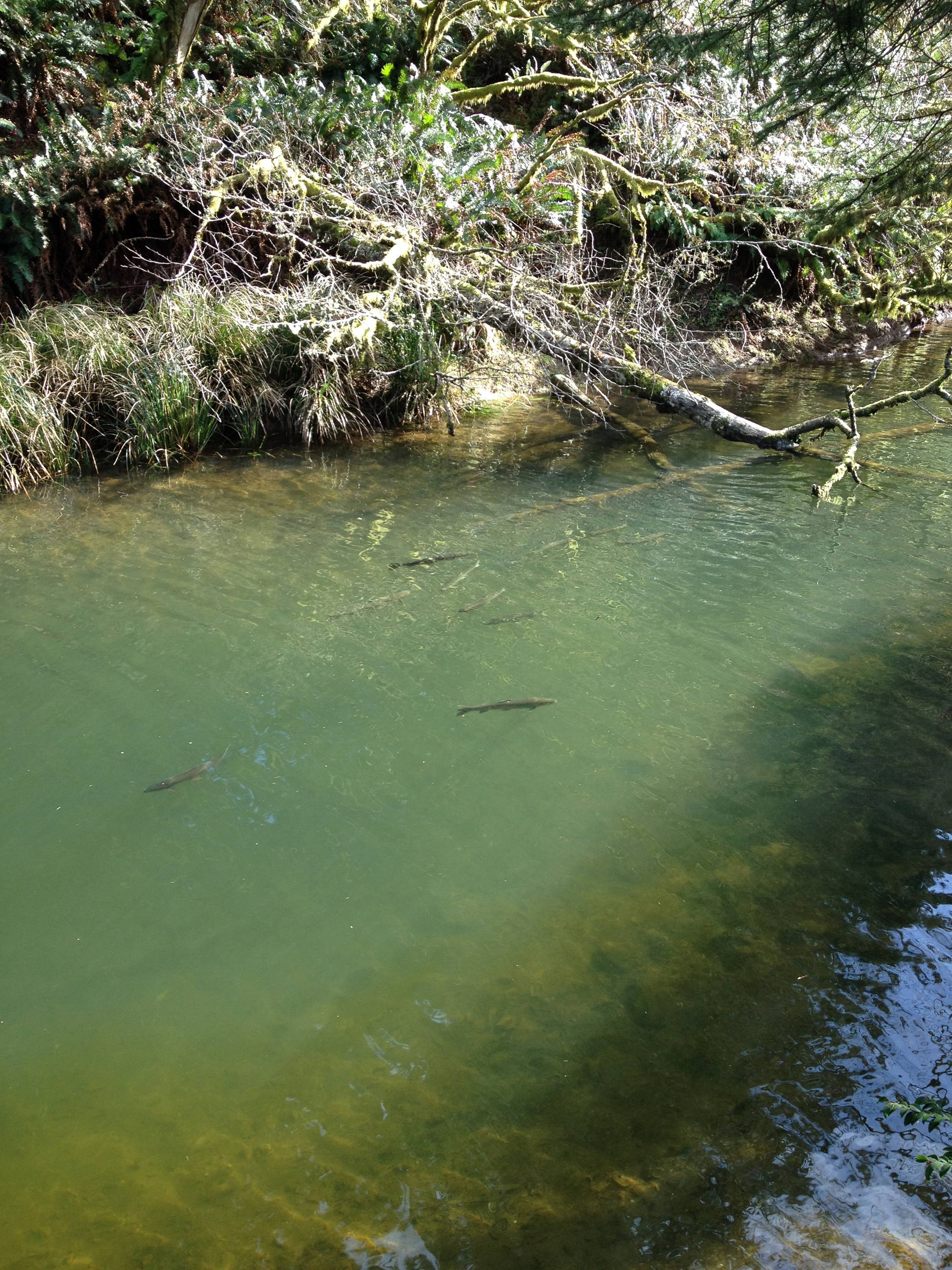 I didn't want to tell a lie in front of the pastor. But I had a ten-pound hatchery steelhead and I didn't feel like blabbing to this guy about where it came from.

My pastor wanted to go steelhead fishing and we picked a Monday morning. To get to one of my favorite pieces of river, I had to walk past a trout lake.

This lake was stocked a half a dozen times in spring and summer, and sometimes ODFW would put surplus summer-runs in it.

Coming back from the river, I carried my ten-pound spinner-caught prize past the end of the lake. At that moment, a fisherman, spinning rod and worm carton in hand, appeared in our path.

"That's a huge trout," the angler gaped. "Did you get THAT in the lake?"

"Where did you catch it?"

"Right there at the end of the lake," I said. Bald-faced lie Number Two.

We walked on, the pastor and I, and after a suitable space had been put between us and the fisherman, he said, "I guess sometimes you have to lie."

In fact, I could have caught that steelhead in the lake because that lake was, and still is, one of the spots where the Oregon Department of Fish and Wildlife deposits surplus fish they don't need for spawning purposes.

On any given day, a trout fisherman with a jar bait or a worm could luck into a steelhead. Wherever fish and wildlife agencies artificially spawn steelhead, there is likely to be a surplus of sea-run rainbows. And when that happens, the fish have to go somewhere.

In some cases, steelhead are picked up and trucked back downriver for another trip past the fishermen. Another option are local food banks. Sometimes surplus fish end up going into a big hole in the ground to feed the worms. The highest use might be to give anglers one more chance. That's why ocean-going steelhead (and sometimes salmon) end up in lakes and ponds.

Decisions on whether or not to stock lakes and ponds are based on the numbers of fish and the run timing. Most of the summer steelhead in the surplus program on the North Coast come out of the Cedar Creek Hatchery.

In most cases, the steelhead at the end of the line is likely to be a buck. The policy on the north coast is for female steelhead to be stripped of eggs, then put back into the river, while the males are separated to spend the rest of their days in a lake.

On the Oregon Coast, the Cedar Creek Hatchery at Hebo raises fish that end up in the Nestucca and nearby streams. Both summer-run and winter fish can end up in the recycling program, but summer fish, when they are stocked in a lake, usually hit the water in November, while winter-runs might be available in February and later. In any case, the steelhead don't seem to last in the lakes past mid-summer.

Coffenbury Lake, near Astoria, is one of the beneficiaries when there are surplus steelhead in nearby hatcheries.

Town Lake, near Pacific City, is one of the first to be stocked with steelhead when there is a surplus (summers or winters) from the Cedar Creek and Nehalem hatcheries. Vernonia Pond, Lost Lake (in the Nehalem drainage), Lake Lytle, and Sunset Lake are also stocked with

steelhead. Cape Meares Lake, north of Tillamook, and Loren's Pond, east of Tillamook, are the other candidates for stocking if there are enough fish to go around.

On the mid-coast, 120-acre Olalla Reservoir occasionally gets steelhead when there is an excess in the Siletz River trap.

South along the coast, inside the city limits of Port Orford, an angler can sit on the shores of Garrison Lake and have a pretty good chance at tangling with a big steelhead at the right time of year.

Middle Empire Lake in Coos County is another place where surplus steelies are deposited in late winter.

In the Willamette region, Faraday Lake, east of Estacada, is one of the first waters to get steelhead if there are too many for the hatchery to handle. Walling Pond in Salem and Junction City Pond are also on the surplus stocking schedule.

In Eastern Oregon, surplus fish from the Big Canyon hatchery often end up in Roulet Pond near Elgin and also in Weaver Pond (a.k.a. Wallowa Wildlife Pond). Surplus steelhead that return back to Enterprise are recycled to Marr Pond.

Peach Pond in Ladd Marsh is another potential steelhead fishery if surplus numbers are high. March and April are the best timing for these eastern Oregon waters.